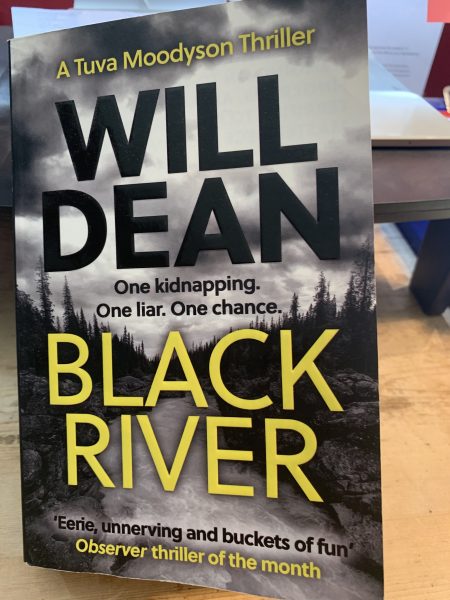 BLACK RIVER by WILL DEAN

Will Dean is an intriguing character in his own right. He grew up in the East Midlands of England but now lives in a wooden house in a boggy clearing at the centre of a vast Swedish elk forest. It’s a lifestyle which lends itself to intriguing social media posts, mostly featuring his son, his neat stacks of logs and an enormous St Bernard puppy. Pre-lockdown, the author of the Tuva Moodyson thrillers was also a regular on the UK’s crime festival circuit and he cuts a striking figure with his full beard and thick flowing locks. He seems to be a genuinely popular contributor to #Writing Community and also plays his part in helping less established writers.

I’m a big fan of his series which is set in remote rural Sweden and comprises a cast of highly eccentric locals in and around the town of Gavrik. His main character, like mine, is a journalist who has the freedom to act outside the restrictions of the local police force. Tuva Moodyson is a young woman who likes other young women, wears hearing aids and is a good friend to have. Black River, the third in the series, sees her returning to Gavrik from her new job on a bigger newspaper in Sondhamn after one of her close friends, Tammy Yamnim, appears to have been kidnapped from her Thai food stall.

Tuva’s frantic search for her friend pushes the plot forward relentlessly as she returns time and time again to confront a gaggle of very weird suspects including a creepy snake-breeder, a pair of ‘cousins’ who have a ship container business and a pair of redneck lumberjacks. The tension builds as Tuva places herself in greater and greater peril as she searches for her friend.

Dean’s setting complements the creepiness of the characters very well and the book is particularly good at conveying the unreal atmosphere of Midsommar in Sweden with its unrelenting daylight and strange celebratory rituals. The nature of the setting is also horribly hostile with Tuva having to evade banks of vipers and clouds of mosquitos, flying ticks, bats and fist-sized moths. Add in a few wolves and protective elk mothers and I can’t help feeling the author isn’t doing much to help the Swedish tourist trade at the moment.

Another woman goes missing and this time it is a tall and beautiful would-be model with an extensive local family. Dean is particularly good at highlighting the racial fault-lines in the community as it reacts in different ways to the disappearance of the two women. He deploys the detachment of an outsider’s view on Swedish society whilst still conveying sympathetic understanding of its traditions and customs.

Tuva was first introduced to us in Dark Pines and her character continues to grow in complexity – however, I wonder whether giving her a drink problem on top of everything else is a step too far? The second book in the series, Red Snow, was largely focused on the town’s main employer, a liquorice factory. And I am afraid that however much Dean ratchets up the strange and claustrophobic eeriness of his setting and characters in Black River, my deep and abiding loathing of liquorice means I found it something of a relief to leave it behind in his latest book. A great read.